Hoping to raise awareness of the significant and varied contributions of African Americans to our civilization’s shared history and culture, Harvard-trained historian Carter G. Woodson, helped found Negro History Week – the precursor to Black History Month – in 1925. It was a resounding success and helped pave the way for our monthlong reflection and recognition of achievements of African Americans in every area of American society.

In the spirit of honoring Black History, we wanted to shine the spotlight on four African American union activists whose contributions helped shape the labor movement into what it is today. Our current successes are built on the shoulders of these remarkable men and women. 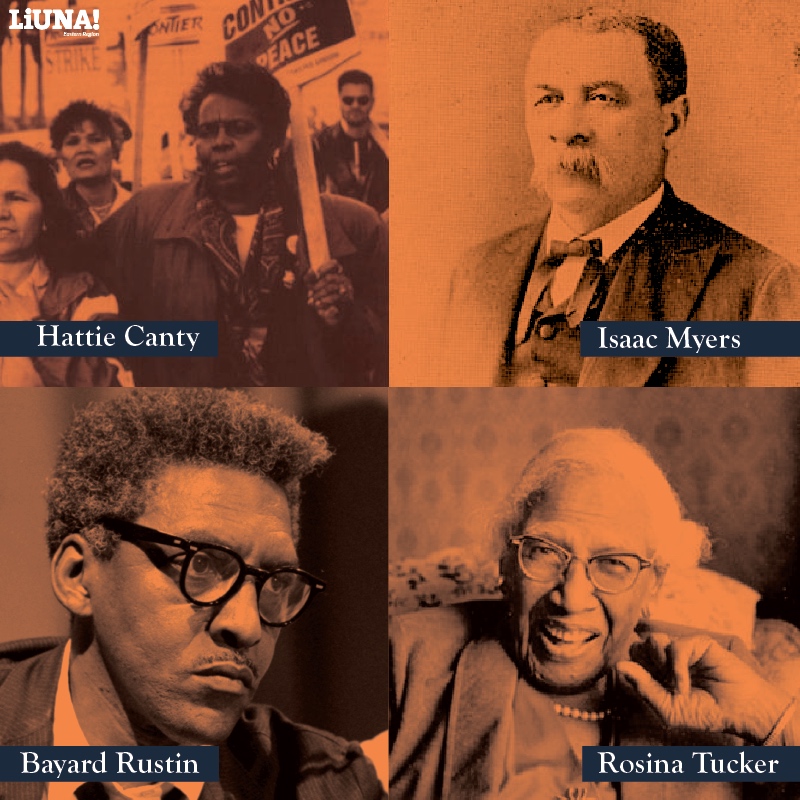 In the 1970s, Hattie Canty was working various jobs in Las Vegas as a maid and janitor. She joined the Las Vegas Culinary Workers Union, Local 226 and was eventually elected President of the local. Through union activism and sustained action (including a 75-day walk-out and a six-and-a-half-year strike), Canty helped establish her union as an economic and political force to be reckoned with. She not only fought to make sure that working people got paid the living wages they earned, she also helped integrate the union, helped people of color obtain better jobs, and established the Culinary Training Academy, which teaches job skills necessary for employment in the hospitality industry.

At the age of 16 Isaac Myers began work along the docks of Baltimore as a caulker, sealing seams in ships. But after the end of the American Civil War, competition for jobs led to strikes and protests by white workers, forcing over 1,000 black caulkers to lose their jobs. Myers proposed the workers collectively pool resources and form a co-operative shipyard and railway, the Chesapeake Marine Railway and Dry Dock Company, to provide themselves with employment. The co-operative, opening in February 1866, was a great success, employing over 300 black workers. Following that success, Myers went on to found, and become the first president of, the Colored Caulkers Trade Union Society in 1868. In response to resistance to integration from all-white unions of the time, Meyers helped found the Colored National Labor Union in 1869 and was elected its first president. He was succeeded in 1872 as CNLU President by Frederick Douglass.

Long time civil rights and labor activist, Bayard Rustin organized the 1941 March on Washington and was instrumental in planning the Freedom Rides and establishing the Southern Christian Leadership Conference in support of advancing civil rights in the 1960s.  Rustin later became the head of the AFL–CIO's A. Philip Randolph Institute, which promoted the integration of formerly all-white unions and promoted the unionization of African Americans. Rustin was posthumously awarded the Presidential Medal of Freedom in 2013, the highest civilian honor in the US.  Describing the motives for his activism, Rustin said, “The principal factors which influenced my life are 1) nonviolent tactics; 2) constitutional means; 3) democratic procedures; 4) respect for human personality; 5) a belief that all people are one.”

Rosina Tucker’s activism extended over eight decades and included organizing the Brotherhood of Sleeping Car Porters under the leadership of A. Philip Randolph, where she also helped found the organization's very successful women's auxiliary. In addition to porters, Tucker also helped organize laundry workers and teachers in the Washington, DC area. Her career as an activist lasted so long that she was both a mourner at the 1895 funeral of Frederick Douglass, and an organizer at the 1963 March on Washington. Still active into her 90s, she was once approached by a young man who asked what things were like in her day. “My day?” she responded. “This is my day!”