MONROE TWP., NEW JERSEY – The New Jersey affiliate of the Laborers’ International Union of North America (LIUNA) has announced today its endorsement of Mikie Sherrill in her race to represent New Jersey’s 11th Congressional District. The politically-active New Jersey Laborers Union includes more than 25,000-members statewide including close to 1,200 union members and their families in the 11th District. 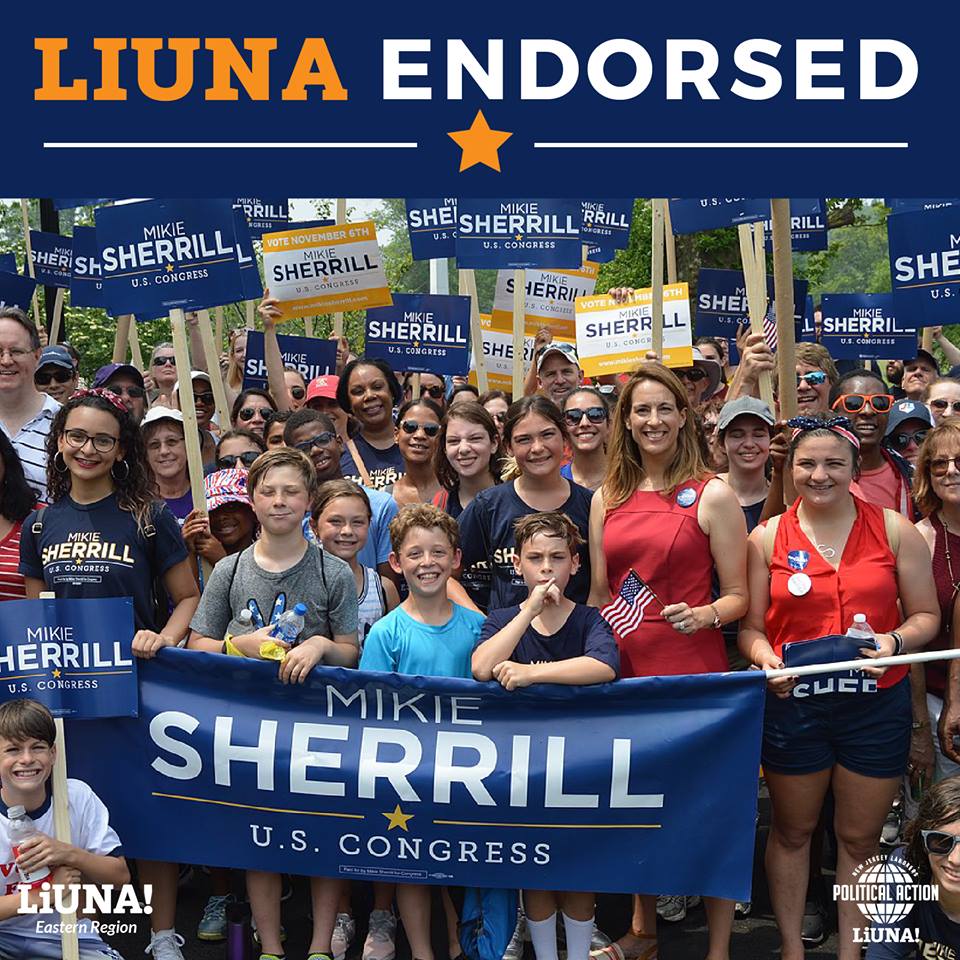 “Our members appreciate that Sherrill has both a long record of public service—as a groundbreaking naval aviator and as a federal prosecutor—as well as a fresh perspective on the issues that matter in our state, region, and country,” said Raymond M. Pocino, LIUNA’s international vice president and eastern regional manager.

As a member of the New Jersey State Assembly, Sherrill’s opponent, Jay Webber, voted against bipartisan legislation that cut taxes for New Jersey residents and that committed $16 billion over eight years to the state’s Transportation Trust Fund which funds repairs and improvements to the state’s aging roads, rails, and bridges. The legislation also doubled the amount of local aid available to communities for their own transportation-related needs and put construction craft laborers back to work by ending a multi-month shutdown of state-funded construction projects.

“We need pragmatic and capable leaders down in Washington DC, not dogmatic and partisan followers. We need Mikie Sherrill,” stated Pocino. “She understands the challenges working families face—from healthcare to housing, education to the environment. Sherrill also shows the capacity to listen and the ability and willingness to craft solutions instead of soundbites, a refreshing and needed change from the same old, same old.”

The union has already begun to educate members and the community on the important issues facing the union and working families.  LIUNA members will also be volunteering for the Sherrill campaign on everything from voter registration to get-out-the-vote drives.

“The members of the New Jersey Laborers Union help move our state forward every single day and I am proud to receive their endorsement,” said Mikie Sherrill. “It’s time Congress invests in New Jersey. We need to embrace bipartisan support for infrastructure spending to create jobs and fix our crumbling roads, rails, and bridges. In Congress, I will fight to make New Jersey a better place to live for all of our residents.”

LIUNA’s Pocino summed up the reason for his union’s support: “The people of the 11thCongressional District are smart enough to understand that governing requires serious-minded people who want to get things done. They have that person in Mikie Sherrill which is why we are pleased to offer her our support.”